The Ad Council is partnering with game streaming platform Twitch to offer livestreams in support of the Seize the Awkward campaign, which encourages young people to speak out about mental health.

The Seize the Awkward campaign encourages teens and young adults to have difficult conversations about mental health by prompting them to reach out to friends or peers who may be at risk for suicide.

From Sept. 18 to 20, Twitch streamers Achievement Hunter, MissKyliee, Natalie “ZombiUnicorn” Casanova,” negaoryx, OMGitsfirefoxx, schviftyFive, and others will hold charity fundraising streams on their Twitch channels and will encourage donations for the Seize the Awkward campaign.

Square Enix will also host a livestream of “Life is Strange: Before the Storm” featuring voice actors Rhianna DeVries (Chloe), Kylie Brown (Rachel), and Katy Benz (Steph) from the game on the stream. The episodic game deals with adolescent friendships, mental health, and social issues, making it an ideal title to stream for the conversations taking place around the campaign.

September is Suicide Prevention Awareness Month, and as the common start of the back to school season it is notably “characterized by transition as young adults return to school or depart for college for the first time, making the Seize the Awkward message of checking in with a friend especially timely and relevant,” according to the press release.

Lisa Sherman, president and CEO of the Ad Council commented on the Twitch partnership as well as the other Seize the Awkward campaign movements with other digital partners like Reddit, Shine, and Tumblr.

“This extraordinary group of leading digital, social and experiential partners will give us the opportunity to reach teens and young adults where they are at a time when they may need to hear this critical message most,” said Sherman. “Each of our September activations offers a unique opportunity to authentically connect with young adults and provide the necessary resources to start important and potentially life-saving conversations.”

From finding highly engaged volunteers to donor cultivation to an offering of several NPO specific tools, it’s one of the best social media platforms to support individual giving efforts. I had a blast chatting it up with Taylor Shanklin of Pursuant about, “How to use LinkedIn for Your Nonprofit.”

According to Social Media Today, the option will enable group admins to highlight the best comments, or new angles of interest, which could help spark further discussion around a specific element, and boost engagement and interaction.

It’s the latest in Facebook’s ongoing efforts to make groups a more critical element of The Social Network. That push comes as more social interactions are switching to private or enclosed forums, with messaging apps seeing the biggest shift. 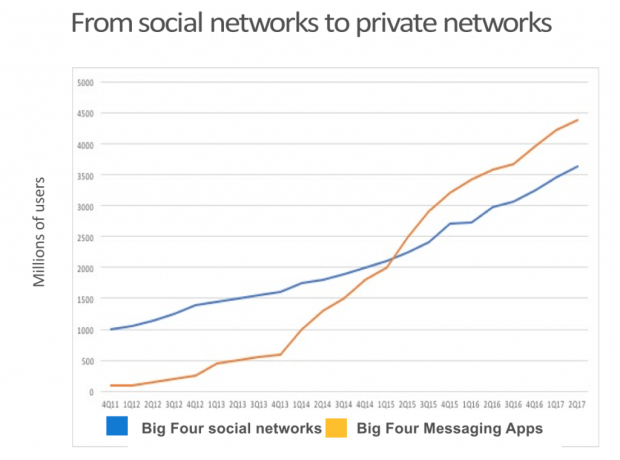 With engagement moving away from the main social feed, Facebook’s looking to capitalize on the fact that more than a billion of its users are engaged in groups, with a significant number of those in what Facebook calls ‘highly meaningful’ communities.

If Facebook can help maximize groups, that could help them ensure users stay engaged, despite the trend away from public sharing. That’s why Facebook’s rolled out a heap of new groups tools in the last 12 or so months, including groups for Pages and group analytics tools.

Adding the ability to pin specific comments may not seem like much, but as noted, it does provide another way for admins to guide the conversation, helping to prompt further comment on the most engaging elements without users needing to scroll through everything else. If a specific comment is sparking discussion, putting it front and center will only help to generate more of it, which could make it a valuable tool for group admins to consider.

Pancakes bring me joy. I’ve never had pancakes on a beach but I imagine if I did, I’d be in heaven. I recently got a slice of heaven.

That’s because IHOP ran its first Facebook Live videos to celebrate its new Paradise Pancakes, which come in flavors like strawberry passion fruit, banana macadamia nut and pineapple upside down. The three videos were simple –  three gorgeous stacks of flapjacks appeared on a table on a beach, with no sound except the waves and occasional seagulls in the background. I wasn’t the only fan – the video had over 380,000 video views earlier this week and is IHOP’s top-performing social video to date.

Take a trip with me to Pancake Paradise real quick:

The worse part about using a BlackBerry has to be the fact that I’m limited when it comes to emojis – IJS.

While everyone is excited for the possibilities of being able to express themselves using slices of bacon, eggplants and middle fingers, I’m limited to smiley faces. So, as you can imagine, with Apple’s latest release, an emoji for good, I’m pissed!

‎Recently, Apple released an emoji which could make a huge difference in the lives of bullied children and teens. The symbol is meant to help bystanders and victims, via social social media and text message, call out cruel comments and harassment, and support those who are bullied.

While the emoji will live on the iPhone keyboard, it’s the centerpiece of an anti-bullying initiative called I Am A Witness and launched by the Ad Council.

I Am A Witness was created in partnership with Johnson & Johnson, Apple, Google, Facebook, Adobe and Twitter. Some of these tech companies have been criticized for not providing their users with the means to adequately stop or report online harassment. This campaign offers another approach to the problem, something both companies and users can get behind.

The Ad Council tested the emoji with teens this year, hoping it might empower them to confront bullying behavior and comfort victims.

This is pretty damn awesome. Maybe I’ll get rid of my BlackBerry. For now, check out the spots which the Ad Council put out for the emoji launch.

Over a year ago, icy water inundated the Internet in what may have been the online equivalent of the largest chain letter ever—the ALS Ice Bucket Challenge. In endless Facebook videos, people hoisted buckets filled with ice water, announced their philanthropic intentions, and upended the buckets over their heads. Breathless, they would nominate a few friends, demanding that they do the same upon penalty of a charitable donation to ALS.

The Ice Bucket Challenge was immensely successful—a break-the-Internet phenomenon that spread all the way up to President Obama. But with this barnstorming success came an undercurrent of critical skepticism. Were people actually following through with donations? Was the campaign saying it was better to be cold and wet than a charitable giver? Was the stunt overshadowing the actual disease? Was the whole thing actually raising meaningful awareness? Twelve months down the road, here’s where things stand according to Charity Navigator.

How much money did the campaign bring in?

The national chapter of the ALS Association (ALSA) reports that, the challenge brought in a staggering $115 million. Participants also donated an additional $13 million to the association’s regional branches. As you might expect, these kind of numbers were unheard of for the ALSA—the charity’s Form 990 filings show they brought in $23.5 million in 2013.

How much has been spent so far, and on what?

The ALSA reports it has spent around $47 million of the $115 million raised thus far, with two-thirds allocated toward research in five different areas: gene discovery, disease model development, identification of biomarkers, clinical trials, and drug development. Some 20% of the money has been spent on patient and community services; the remaining 11% has gone to education, fundraising, and processing fees.

Charity Navigator gives a firm no. Since ALS is a disease with no known cure, the fight against ALS is largely focused on research. Eradication is more of a priority than palliative care, seeing as the disease is 100% fatal. In interviews with Charity Navigator, multiple chapters of the ALSA described spending plans of up to three years, because research often gets paid out over multiple years. And since one study frequently begets another, smart spending is even more important.
What concrete accomplishments can ALSA point to?

Direct patient and community services have produced most measurable results, since patient care is immediate and concrete. For example, the Palm Beach Post reported that the ALS Association Florida Chapter was able to hire a bilingual regional care manager.

Some progress has been made thanks partly to Ice Bucket Challenge research funding. Working with Ice Bucket money, researchers from Johns Hopkins University identified a protein that fails in the cells of most ALS patients, and showed that if they repair the protein, the damaged cell can heal.

It can take years or even decades for researchers to find scientifically proven treatments, let alone cures for deadly diseases, so donors may have to be patient to see what other results the ALSA-funded research yields.

Lots of money was raised, but what about awareness?

During the campaign, various people raised concerns that participants were more more caught up in the viral sensation than the cause, giving less money than a typical donor and often without even knowing much about the disease. There are two kind of donors, those who are deeply engaged in the cause, giving over many years, and those who respond to the social media wave.

Even if most donors don’t know what the letters “ALS” stand for or anything about the illness, it’s hard to look a $115 million gift horse in the mouth.

Twitter-owned Periscope launched in Marc and since then, brands have been curious (or terrified) about how to turn livestreaming video into ads. Twitter doesn’t offer Periscope ads (just)  yet, but a campaign from Nestlé this weekend shows how marketers can still work slick marketing into the mix.

This Sunday is the Summer Solstice, and Nestlé’s Drumstick brand is marking the holiday with a slew of social video clips that promote the chocolate-topped ice cream cone. Nestlé has hired a handful of notable Periscope personalities to broadcast classic summertime scenes—think backyards and amusement parks—to their followers.

Each stream will include the hashtag #ad in the title of the video to indicate that it’s sponsored, similar to how social media influencers have delineated promotions on Vine, Instagram and Twitter.

Because Periscope accounts are connected to Twitter, the livestreaming app automatically will post a tweet with a link to the real-time broadcasts. Drumstick is buying Promoted Tweets to push such tweets and ultimately drive viewership, and the brand has also hired an additional 100 Twitter influencers to tweet about the ice cream this weekend.

Meanwhile, Drumstick opened its own Periscope account yesterday and will be livestreaming 15 to 20 scenarios on Sunday from beaches, amusement parks, backyards, lakes and on the street in New York City.

Let’s see how this goes!

cause marketing celebrity charity companies give back Inspiration journey for change married to the mission non-profit support Social Media and Non Profits the power of celebrity you can make a difference
Follow the ajayi effect. on WordPress.com