In Facebook CEO Mark Zuckerberg’s nearly 6,000-word manifesto published last month, he laid out a number of global ambitions he had for the social network in the days ahead — including one where its users became more “civically-engaged” and voted more often. Now it seems Facebook has taken its first steps toward making that possible, through a new feature it’s calling “Town Hall.”

This latest addition has just popped up on the “More” menu in Facebook’s mobile app, and offers a simple way for users to find and connect with their government representatives on a local, state and federal level.

To use Town Hall, you only have to enter your address — which Facebook says is not displayed or shared (though it doesn’t say it’s not “saved,” so be advised). We understand this information will be used to power future civic engagement products, like finding a polling place or previewing a ballot.

This information will help populate the following screen with a list of your representatives, all of whom you can follow with just a click of a button. The list includes not just those representing you in the U.S. House and Senate, but also your state legislature and your governor, local council members and your mayor, as well as those in other federal positions, like VP Mike Pence and President Trump. 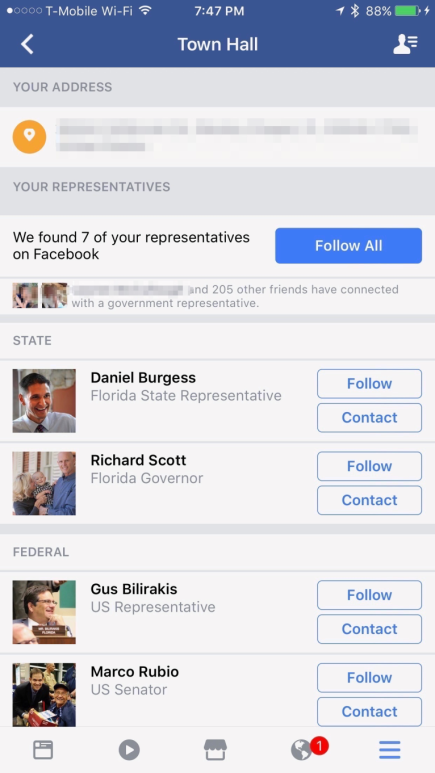 The list you’ll see will be based on your location, which means you might not have local reps appear — for example, if you live in a smaller town where local officials don’t maintain a Facebook presence.

In addition to being able to follow their Facebook Pages in order to receive their updates in your News Feed, each representative also has a “Contact” button next to their name.

When tapped, you have the option to “Message” them, “Email” them, or visit their Facebook Page. Of course, not all representatives are as available as others. In many cases, there may be no means of contact beyond visiting a Facebook Page.

Town Hall is hardly Facebook’s first foray into politics. The social network has regularly prompted users to register and vote through a number of means, including push notifications, banners in its News Feed, Messenger integrations, maps to polls, social sharing features (like “I voted”) and more — including, in this past presidential election, an “Election 2016” shortcut in users’ Favorites section on both web and mobile. It also published a voter guide, which included down-ballot propositions and local races.