So Jay-Z has been struggling to get people to buy into his streaming music service, Tidal. Folks don’t appear to be biting. Last night, Jigga made another effort to push the offering. This time around, he used charity along with his wife, Beyonce, Usher, Nicki Minaj, T.I., Lil Wayne and the results weren’t too hot. I didn’t say it, The New York Times did: 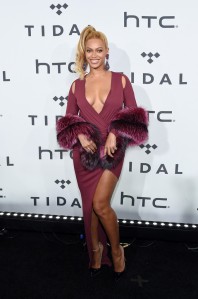 At least Bey had a good time.

For the most part, the stars came out, put in their few minutes, then disappeared — the night played like an old-fashioned telethon. Maybe that’s why the performances from the show that were broadcast later in the night on “Jimmy Kimmel Live” were more impressive: Sweeping cameras and strong editing can do wonders.

This show was merely too big to fail, and so of course it did. It’s hard to see Tidal as something other than an oligarchic hustle when it primarily engages in oligarchic behavior.

Well at least good will get done: 100 percent of the ticket proceeds from the show went to the New World Foundation, with the money earmarked for “organizations dedicated to advancing positive community relations and effecting systemic change for the development and sustainability of just societies,” according to Tidal’s website.