More and more information is being released relating to non profit social media marketing and fundraising efforts these days. I’m a data-monger and so it’s all good. However, I will say that I absolutely love it when insights are presented in pretty little infographics.

In my previous post, I shared research from the 2013 eNonprofit Benchmarks Study, conducted by M+R Strategic Services and NTEN which crowned email the Queen of fundraising tools.

Below are additional findings including an infographic which speaks volumes (click on it to enlarge). The study showed: 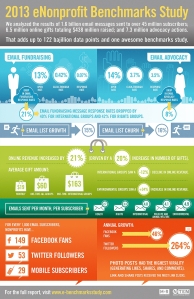